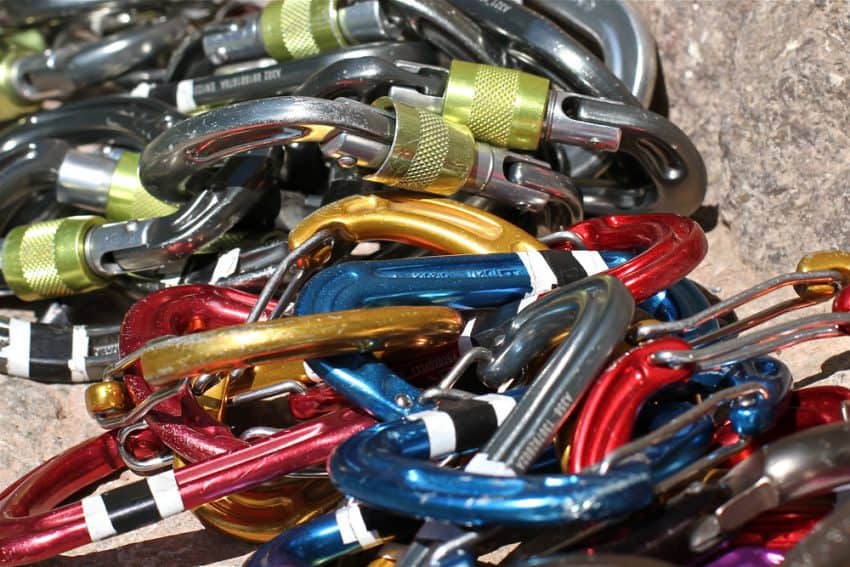 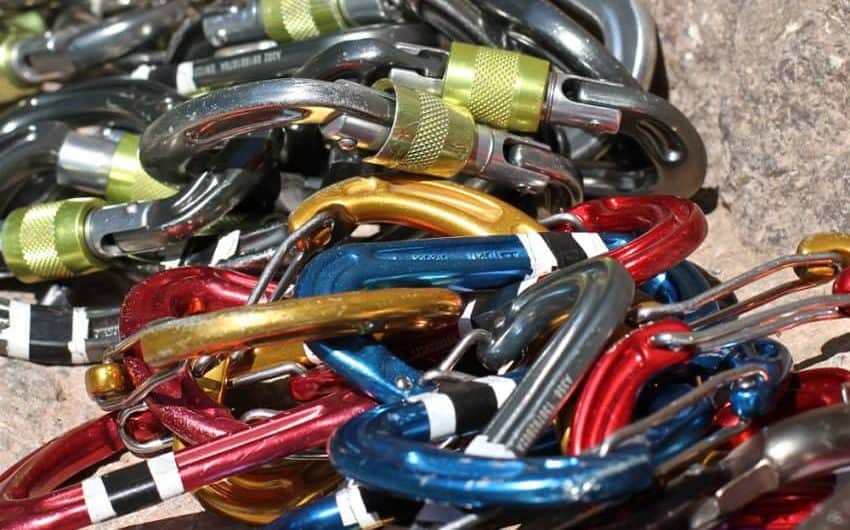 When instructing beginners, I always spend a bit of time on the different Carabiner and types. There are so many types and options, and of course, climber slang to Carabiners. Whether you call it a “Krab” or “Biner”, there are lot’s of variety and options to choose from. More than just choosing a nice colour!

Carabiners are one of the most common and used pieces of kit in a climbers? rack. They are used to belay with, set up anchors, create ?running belays? and a whole host of other tasks. There are so many different choices available to you, when you come to buy your first few biners, it can be difficult to know where to start.

Even though at first glance climbing equipment looks like it comes in a million different varieties, shapes and sizes its usually not nearly as different as it looks and once you understand the basic properties of certain types of kit, it all becomes much clearer. Carabiners are a perfect example of looking far more complicated than they actually are. Below we have outlined some of the most important characteristics and differences between the various Carabiners available.

Whilst we have covered some of the bigger and most important differences there are still subtle details that make one crab?better than another for certain jobs, and to understand everything about a particular biner the best place to look is the manufacturers website where you will get all of the specs (and a fair bit of flowery sales schpeal!).

A locking carabiner will have some form of metal sleeve or mechanism that enables the user to lock the gate shut. These carabiners are used in situations where there is a risk of the gate being opened accidentally, typically while belaying or building anchors.

A non-locking carabiner (often referred to as a?snap-gate) simply relies on the spring of its gate to keep it shut. These carabiners are most commonly used as part of a quickdraw, for running belays, to rack protection and any time where there is no risk of the gate being opened accidentally.

Threaded metal sleeve covers the gate, which is manually screwed and unscrewed to open and close the carabiner. These?are the most common locking carabiners and come in just about every shape and size.

Normally a spring loaded metal sleeve covers the gate, which is manually rotated to open, but will spring closed and lock automatically when released. Recently Black Diamond launched its Magnetron range which uses small magnets built into the gate to automatically lock the carabiner when closed. Auto lockers are nearly always heavier than screw gates and a lot less widely used, but they are great for beginners groups, children, and also big wall climbing as you have that little extra security.

These are a fairly new breed of carabiner that have a mechanism to prevent cross loading. Some also will not close unless the screw gate is done up, like DMM?s Belay Master, and AustriAlpin?s OvaLock. DMM have just released their new Rhino carabiner which is specifically designed to be used with assisted belay devices such as the GriGri 2 and Trango Cynch. Instead of the normal mechanism to prevent cross loading the Rhino has a small horn which prevents the assisted device from sliding around the biner onto the back bar.

A pear shaped carabiner which is especially good for using with a belay device, and Munter (Italian) hitches.They tend to have a very wide gate opening and are usually very strong. HMS stands for Halbmastwurf Sicherung, which roughly translates to munter hitch securing, because it was first designed to be used with the munter hitch .

Traditionally the strongest shape for a carabiner. Great for general rigging of belays, use with Prussiks etc. The offset D-Shape forces the rope to load the back (strongest) bar of the biner, making it very strong, and safe to use with ropes. Also has a big gate opening. Another good rigging biner. Available as a locking and non-locking biner.

Not quite as strong as a D-Shape or HMS, although these days most are rated to 25kn (gate closed), so the screw gate versions are strong enough for a multi purpose biner. They are especially good for use with pulleys, as they allow the pulley to hang straight. Great for big wall climbing and also as a belay biner. Available as a locking and non-locking biner.

Carabiners are only referred to as solid gate when they are non-locking. A solid gate biner is generally used for sport climbing because they tend to have smooth anti-snag noses which aid clipping and unclipping of bolts. Oval solid gates are also great for racking nuts on.

Wire gate carabiners are only available as non-locking biners. Usually favoured by trad and winter climbers because they weigh so much less than solid gate biners.

Patrick
have been doing outdoor activities solo since my early adulthood. Usually when I get involved in a hobby or sport, I don?t let go until I achieve a high level and understanding of the sport. I got my scuba instructors in 2001. In 2006 I took up Kite surfing and am one level away from instructor on kite surfing. I have been doing trips into the wild, the off the beaten path trips for most of my life. I learned to repel and climb at a young age and have always enjoyed camping and backpacking. Over the 6+ years, I have gotten really involved in alpine style mountaineering. With certifications in mountaineering, and instructor certifications in lead climbing, and repelling (abseiling), I enjoy sharing or knowledge and teaching to those who have a passion for outdoors. Now I am working on completing the outdoor wilderness leadership program. People have always heard of my trips, and spoke with envy that they wanted to try such things but didn?t know how. This has inspired me to move to open this company. The Wildfire Expedition Company or ?Wildfire Expeditions?
Previous postTRAD Climbing Protection: Camming Devices Explained
Next postIndoor Climbing Equipment
Site by: High Spec Solutions Theme: Adventure Tours
© Adventure Tours 2015 All Rights Reserved Site Map Disclaimer
Wildfire Expeditions Pte Ltd, UEN: 201617909G Singapore Travel Agent License No. 02927