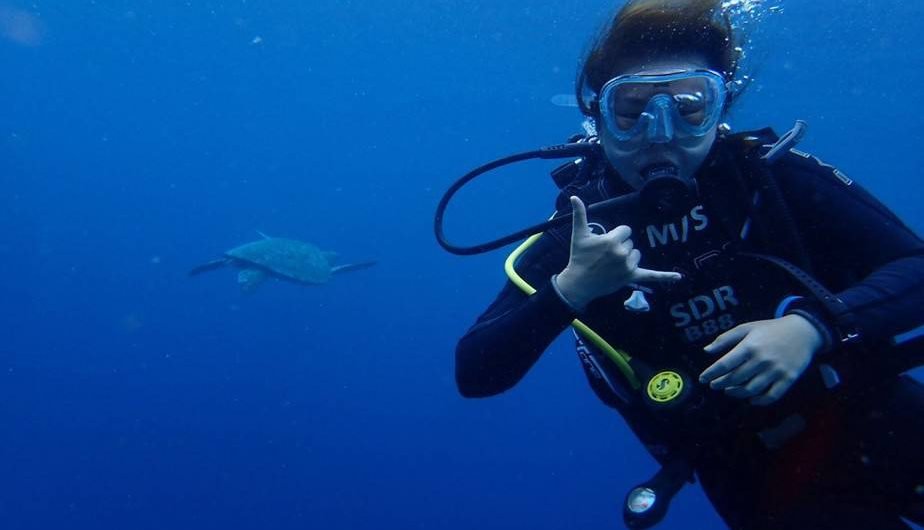 No stranger to dive trips, I was not sure what to expect for Sipadan. I have heard so much about it, photos, videos, read numerous rave reviews about the operator Mike decided to go with. Can the experience live up to the hype? 11 people, a mish-mesh of nationalities and experiences, some of whom are meeting one another for the first time, how will the group dynamics pan out? In the end, it turned out to be one of the best dive trips I have ever been on. The organization was impeccable, thanks to the hard work (and creativity in sourcing transport options!) The group was passionate about diving and fun fun fun. After the first hour, it didn?t matter that I was meeting the group for the first time. Arriving ahead of schedule at Tawau airport, we were met by Seaventures and transferred to their office at Semporna via a sometimes bumpy road to complete outstanding paperwork. Then it was a short ride to the ferry for the 45-min speed boat to the dive rig. We were introduced to Adam and Mando, our dive guides for the next 3 days, and Ramesh, the manager of the rig. The setup of the rig was explained to us, including the dive deck, mealtimes, and rig protocols. We were then shown to our rooms. I was pleasantly surprised by the comfort. It did not feel like we were living out at sea. The size of the rig and the structures holding it in place also made it much more stable than the usual liveaboards. We did not manage to get in a check-out dive that day but diving a record 13 dives in 3 days, I would say we made up for it thereafter.

Finally, the long awaited day. As we had bargained for a 6am departure, I dragged myself to the dive deck at the ungodly hour of 5:15am, fueled purely by anticipation. Some food was already available. The ride to Sipadan was lovely. The sky was changing colour and it was cool. We were beaten to the permits checkpoint by another boat but the queue didn?t take long. Soon enough we were gearing Unlike the previous sites, Sipadan was mostly wall dives that go deep. The reefs were brimming with colours and life. Enraptured by the reefs and trying to spot stuff in hidden within, it was easy to descend deeper without realizing it. Philip was gunning for a shark. And not just any shark but a Whale Shark. Sadly, Sipadan did not deliver that. But reef sharks were aplenty at South Point (aka Shark Point). A loud tinker ? a lone white tip cruised by from the blue. Another tinker. Look up! And then look to the right! And the left. And then they just darted through. Reef sharks of different sizes. A baby. Numerous lounging at the sandy bottom. I gave up trying to photograph the moment and settled back instead to enjoy the spectacle and imprint the image in my mind. Barracuda Point The highlight of my Sipadan was Barracuda Point. Swimming along with the wall on my right, I was looking for the usual things when I saw first one then a couple of barracudas swimming by. Bigger than any I have seen before. Ah, now I see why it?s called Barracuda Point.. Another kick, and my eyes gradually picked out a solid formation of silver and grey. And THEN, I truly saw why it was called Barracuda Point. 50? 100? 200? Big, long, many. I was enraptured. Biddy did a little dance. Wow wow wow..
The last night. On a high from Sipadan, even record 5 dives a day did not dampen our energy. One of our divers, the lovely French Anne-Sylvie, was celebrating her birthday on our last night. Champagne and wine flowed on the sundeck to the setting sun. While we were loathed to leave what would be the last sunset onthe rig, tantalizing smells of barbeque wafting up incentivized the move to the dinner deck ? that and we were starving! The spread on that Saturday night was incredible. Grilled fish, meat, delicious potato, salads. I could eat all night. Except that the party came on.

Exploring underwater wonders together for an hour, excitedly pointing out the octopus in the rock, spinning into the tornado of barracudas, witnessing a cuttlefish change color and texture; the delights of the moment creates that special bond that is difficult to relate to anyone outside of your dive buddies. Much time was spent just hanging out on the dive rig, exchanging cameras to gasp over, doing ?homework?, getting a beer, cleaning gear, talking, jumping off the rig. As amazing as the diving was, it was the company, the camaraderie of strangers and acquaintances turned friends that made my experience.