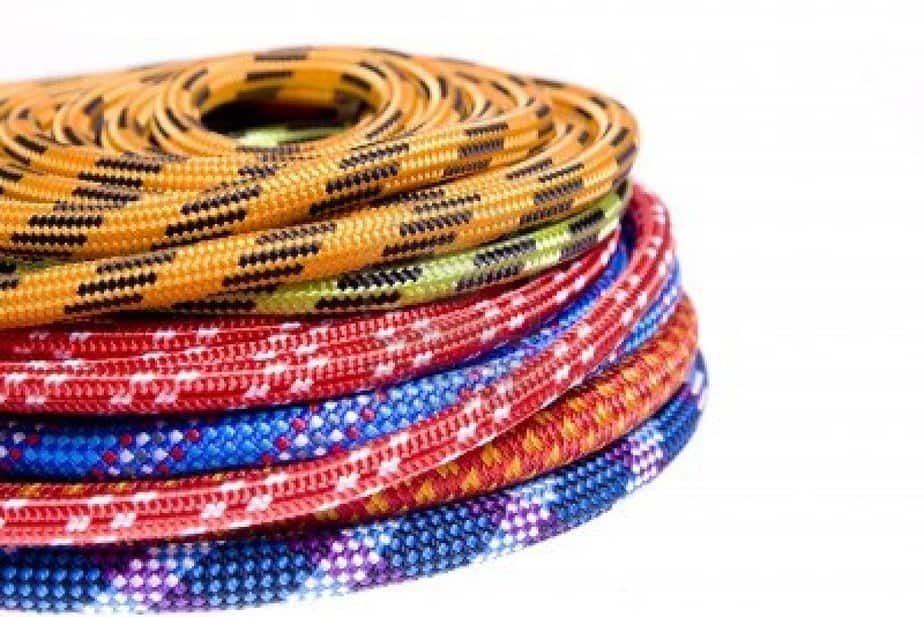 Human beings have been using ropes for various purposes since prehistoric times, and before we started to make them, it?s likely that we used natural vines and creepers (see Tarzan). They have always been as integral to our lives as the wheel and were around long before. In this article you will find a little bit of history on ropes, how they are made, the different types, what they are used for and what things like impact force, elongation and number of falls mean.

Climbers have used ropes to safeguard themselves for as long as there has been climbing. The first types of ropes that were used were generally made of strands of Hemp or Sisal twisted or woven together. These early ropes had a very poor strength to weight ratio, were stiff and awkward to handle and often failed.

In 1941 the first nylon ropes were being produced in the USA and France, but 12 years later the German company Edelrid was to make the most significant breakthrough in climbing rope history. In 1953 they invented the Kernmantle rope, and this is what we are still using today. The word comes from the German word?Kernmantel?and means coat-protected core. This invention revolutionised climbing ropes; hemp ropes and rope breakage very quickly became a thing of the past.

Yet another breakthrough by Edelrid in 1964 saw the introduction of the first Dynamic rope, capable of withstanding multiple falls, and that was the grandaddy of the Dynamic rope we use today.

Kernmantle rope is how all climbing ropes are made today. The Kern is the core and the mantle the sheath

These ropes are chiefly made of nylon (polyamide), but are sometimes made of polyester, aramid and other man made fibers. The strength of the rope is made up of both parts, core and sheath, and the proportion of each depends on the type of rope you buy.

Dynamic ropes are constructed to stretch under load, and will absorb much of the energy exerted in a fall and this is what makes them so good for climbers. If a climber were to take even a small fall onto a rope with little or no dynamic properties the result would be serious injury and even death.

Often referred to as Static rope, this is, however, usually incorrect as most have some degree of stretch. Semi-static ropes are used extensively by industrial rope technicians but also by climbers for a number of jobs. Whilst it is sometimes possible to use a Semi-static rope for top or bottom roping, where there is absolutely no possibility of a shock load, these ropes must never be used for leading. The most common uses for these ropes are abseiling and rigging anchors.

The 3 Types of Dynamic rope

Dynamic rope comes in three different types and you will always find a symbol at each end of the rope to tell you which one it is.

All of the ropes we have mentioned come in a wide variety of diameters. From as little as 6.9mm right up to 16mm, however there are restrictions in diameter for each of the main types of ropes.

As already mentioned all dynamic ropes will have a symbol to tell you which of the three types of rope it is. There is also a whole load of other info about the rope, typically found on the packaging and always found in the manufacturers recommendations, included.

Union Internationale des Associations D?Alpinisme is the international mountaineering and climbing federation that has created the standards to which all dynamic climbing ropes with the U.I.A.A mark must adhere. The standard is 101, and EN 892. Whilst these numbers may mean very little to most, it?s important to make sure the rope you buy has been passed by the U.I.A.A. Any ropes without this marking should be avoided.

This is the number of UIAA falls the rope can handle before it loses its dynamic properties and risks possible failure.

This marking can be very confusing to even fairly competent climbers. It does not mean that after you have taken the marked amount of falls, that you need to buy a new rope. The EN 892 test requires a single rope to hold a minimum of five factor 2 falls with 80kg at an impact force of less than 12kN.

To read more about fall factors, see our article on ?Understanding Fall Factors?, but in brief, a fall factor greater than 1 is totally unacceptable and should never happen. If you do take a significant fall on your rope always make sure to have a good inspection of it afterwards.

The number of falls can give an indication of how robust the rope is, the more UIAA falls it can take, the harder wearing the rope will be.

This is a very useful figure in helping you decide which climbing rope you should buy .?The impact force marking on a climbing rope is the amount of force in kN (kiloNewtons) that the first UIAA fall exerts on the falling body.

The aim is to create a rope with the least amount of impact force whilst staying within the maximum elongation figures. This means less force transferred from the rope to the climber, belayer and anchors, massively reducing the risk of injury or anchor failure. This is especially important to trad and ice climbers.

This is the amount of stretch in the rope when a 80kg weight is hung from it.

This is the amount of stretch in the rope after the first UIAA fall test. We already know that having stretch in your climbing rope is essential, but if it has too much stretch then there is a very high risk of a climber hitting a ledge or even the ground, so the UIAA sets the maximum elongation of a rope to 40% of the rope that?s paid out. So a fall onto 10m of paid out rope cannot exceed more than 4m of stretch, and this needs some considering when you?re climbing.

This is no longer required by the UIAA, ?but to increase safety a number of rope manufacturers still use it. It basically tells you how your rope may resist cutting when in contact with sharp edges.

The sheath on a badly made climbing rope can stretch out of sync with the core and this will mean the rope will become lumpy and, in the extreme, dangerous. The Sheath Slippage test is the only test where the CE (EuroNorm) requirement differs from that of the UIAA. After pulling two metres of rope through a designated constriction, the European Standard requires that the sheath slippage should be less than 40mm, or 2%, whilst the UIAA standard is more severe, requiring a value less than 20mm, or 1%. However, many modern climbing ropes achieve 0% or very close to 0%.

Whilst Semi-static or Low Stretch ropes do come under UIAA guidelines, standard 107, this standard is based on the European Standard 1891:1998. Semi-static ropes come in two types. Type A and Type B. Type A is the most commonly used as it conforms to all of the standards of EN 1891, whereas Type B ropes do not, and as such should only be used after careful risk assessment.

There are far too many different types of rope treatments to be able to cover them all in this article. In general the most important one will be some form of dry treatment, to stop the rope absorbing too much water. This is most important to winter climbers and mountaineers. Ropes obviously become far heavier when they are wet and of course in cold temperatures can freeze, making them very hard to handle and in the extreme, very?dangerous.

All good rope manufacturers offer a number of different choices in dry treated ropes, the most basic will be a simple treatment that is applied to the sheath only, and will essentially make your rope water resistant, but not water proof. After prolonged exposure, they will eventually absorb water into the core. However this type of treatment is really all you need if you?re trad?climbing, and sport climbing.

A more expensive alternative is a fully dry treated rope, such as Golden Dry, from Beal. This means the sheath and the core have both been treated, and will give you the best protection from the elements.

Another useful benefit of either dry treatment is that it will often make your rope a little more durable, meaning it may last a bit longer.

Other treatments include, heating the rope to give it smoother handling characteristics, like Edelrid?s Thermo Shield, Beal?s new Unicore technique actually binds the sheath to the core resulting in a rope that has absolute zero sheath slippage, and is far safer in the event that the sheath is cut.

Like any piece of climbing kit, your rope?s lifespan?will depend entirely on how often and where you use it, and also on how well you look after it. Some manufacturers will offer guidelines for maximum shelf life and also maximum working life. These are only guidelines and climbers need to develop their own opinions on when a rope should be retired. Don?t be tempted to ?downgrade? your rope from an outdoor to an indoor rope or similar. It is either safe to use or not safe to use, it makes no difference where it?s used.

This article is meant as a basic introduction to ropes, and there is much more extensive information available in books and online for those who want it.

Since companies like Edelrid began making climbing ropes over 150 years ago, the technological advances have been enormous, but it?s worth considering that we are still using the basic design of the Kernmantle rope invented 56 years ago.

Of course, there are some truly amazing and unique ropes available now, like Beal?s Hotline, a rope using an Aramid sheath under a normal sheath, giving resistance to harmful chemicals, or the Raider also by Beal, that can withstand temperatures of up to 350 degrees Celsius for up to an hour and still retain 90% of its strength.

Lastly, your rope ? no matter how well it?s made ? will only maintain its strength and safety if you look after it properly. Always thoroughly read the manufacturer?s recommendations before you use a new rope, and make sure you know how old your rope is.

Patrick
have been doing outdoor activities solo since my early adulthood. Usually when I get involved in a hobby or sport, I don?t let go until I achieve a high level and understanding of the sport. I got my scuba instructors in 2001. In 2006 I took up Kite surfing and am one level away from instructor on kite surfing. I have been doing trips into the wild, the off the beaten path trips for most of my life. I learned to repel and climb at a young age and have always enjoyed camping and backpacking. Over the 6+ years, I have gotten really involved in alpine style mountaineering. With certifications in mountaineering, and instructor certifications in lead climbing, and repelling (abseiling), I enjoy sharing or knowledge and teaching to those who have a passion for outdoors. Now I am working on completing the outdoor wilderness leadership program. People have always heard of my trips, and spoke with envy that they wanted to try such things but didn?t know how. This has inspired me to move to open this company. The Wildfire Expedition Company or ?Wildfire Expeditions?
Previous postTrad Climbing Gear Review: Passive Protection
Next postPhoto Shoot: Lopburi, Thailand Outdoor Rock Climbing and Sunflower Fields
Site by: High Spec Solutions Theme: Adventure Tours
© Adventure Tours 2015 All Rights Reserved Site Map Disclaimer
Wildfire Expeditions Pte Ltd, UEN: 201617909G Singapore Travel Agent License No. 02927